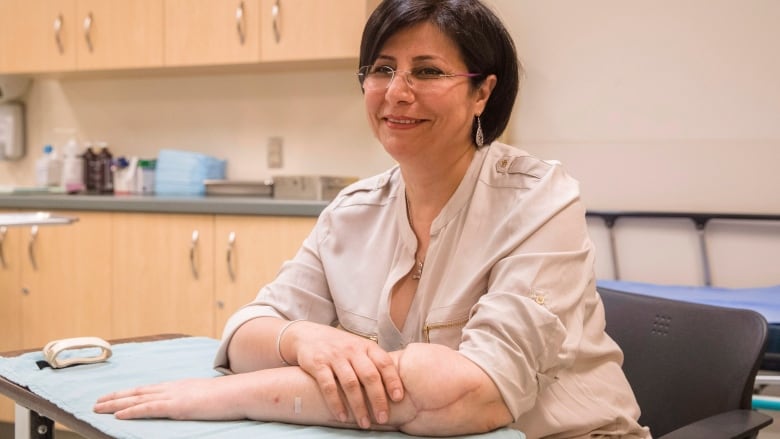 Maryam Zolfi underwent the successful arm transplant at Toronto Western Hospital five months ago. Her left arm had been severed below the elbow in a car accident in 2005. (Mark Blinch/Canadian Press)

In January, Toronto surgeons announced they had performed Canada’s first hand and forearm transplant. Now, the woman at the centre of that groundbreaking surgery is going public, sharing the journey that has once again made her feel whole.

It’s a story of faith, determination, and a belief that the miracles of medicine could wipe out the pain of the past and give her a brighter future.

In 2005, Maryam Zolfi’s world was forever altered when her left arm was severed below the elbow in a horrific car accident. Three years later, the registered nurse was back at work, wearing an artificial arm that was cosmetic but non-functional.

“It was very difficult,” the 50-year-old confided in an interview this week at Toronto Western Hospital. 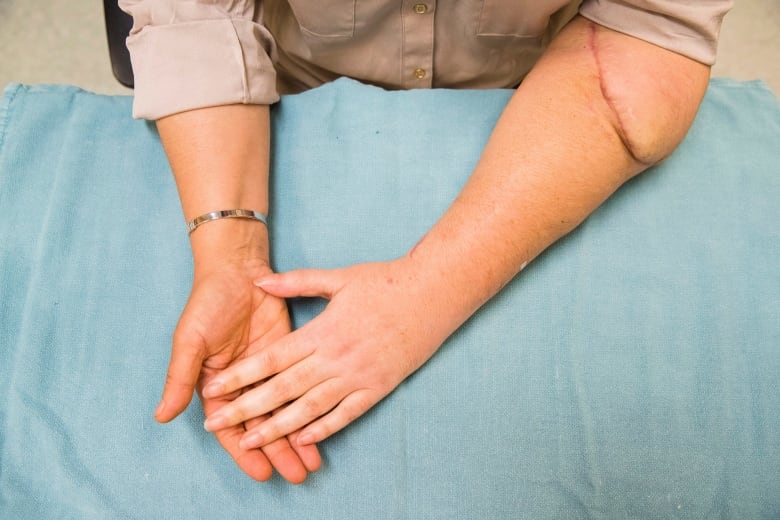 A team of doctors prepared for the surgery for more than a year. A future surgical revision will be carried out to reduce the appearance of scarring. (Mark Blinch/Canadian Press)

“The people, when they realized I didn’t have a hand, the way they talked to me, and everyone (was) pitying me,” she recalled, saying she attempted to hide her prosthetic by wearing long-sleeved tops, even in the heat of summer.

“I tried to do my best, but the people, some of them … they didn’t believe in me, (they thought) that I’m disabled.”

Four years ago, Zolfi began searching the Internet for information about hand transplants. She discovered some American hospitals were performing the procedure, but doctors there told her that only U.S. residents were eligible.

While many hand transplants had been done in the U.S. since the first in that country was performed in 1999 — more than 100 have been completed worldwide — Canadian doctors had not yet attempted the operation. Zolfi put aside her search.

“Then something happened three years ago,” she said. “My pastor told me he had had a vision about my hand. He saw in the vision that I have a hand, in the future. 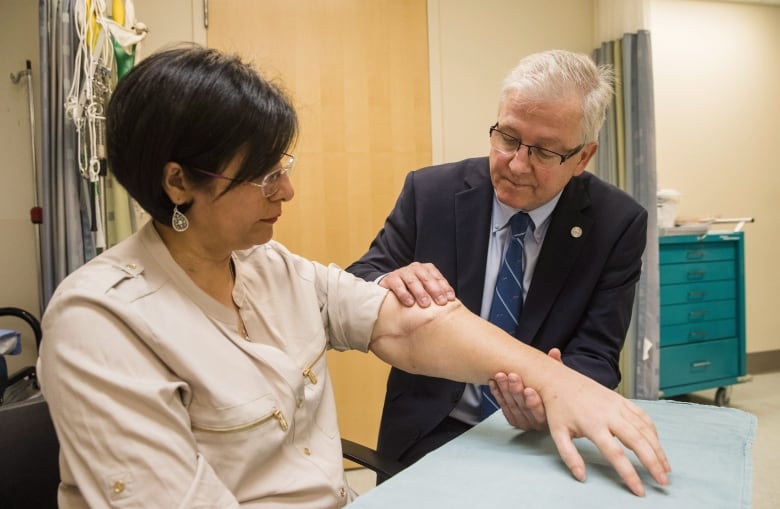 Maryam Zolfi demonstrates some arm and hand movement with Dr. Steven McCabe, who operated on the registered nurse and was on a team of surgeons that carried out North America’s first hand transplant in the late 1990s. (Mark Blinch/Canadian Press)

“In 2014, I had a dream. In my dream, I had a hand, but it had a mark of surgery — from here to here,” she said, pointing to the scars where her new forearm was attached at the elbow. “And it was intact. It was like my hand. It was the real hand.”

A month later, Zolfi began searching websites again for anything related to hand transplants in Canada. She discovered that doctors at Toronto Western Hospital were looking for a candidate for what would be the country’s pioneering foray into the complex surgery.

She contacted the lead surgeon on the project, Dr. Steven McCabe, to see if there was any chance she could be that patient.

McCabe, a specialist in plastic and reconstructive surgery, agreed to see her. But during their consultation, he told Zolfi the team was looking for a patient with a wrist amputation — not someone in need of a forearm, a far more complicated surgery.

“He told me there was no chance for me.”

But after consulting with American colleagues who had done the operation, McCabe brought Zolfi back in for X-rays, blood tests and psychological evaluations.

“And they chose to use me,” she said with a shy smile.

On Jan. 7, at 2 a.m., a team of 18 surgeons began what would be a 14-hour operation to attach the forearm of a deceased female donor whose age, skin colour, size and blood type were a match for Zolfi. 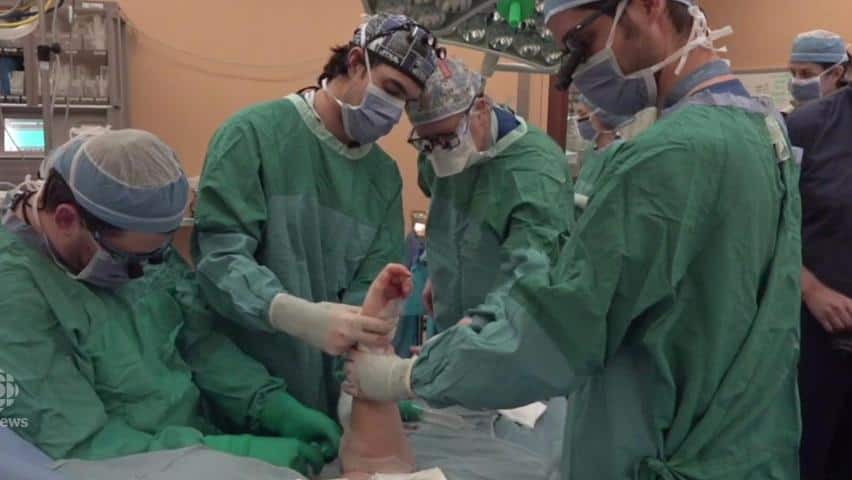 18 surgeons work to attach a hand and forearm to a female patient at Toronto Western Hospital 0:33

The unidentified donor had come through the Trillium Gift of Life Network, which had been working since 2013 to build a program to facilitate an upper limb transplant.

“No,” Zolfi whispered, her dominant right hand softy stroking the fingers of its new mate.

“Because I had the faith. God showed me in my dream it’s going to work, and I didn’t even think about the side-effects or other things. And I just asked God to do this for me, because I knew that it was going to work.”

Did not want to see transplant at first

While she had no qualms about taking on another person’s body part — in rare cases, patients unable to come to terms with their transplant have asked to have the donor appendage removed — at first she didn’t want to see it.

By the second day post-surgery, that had changed. 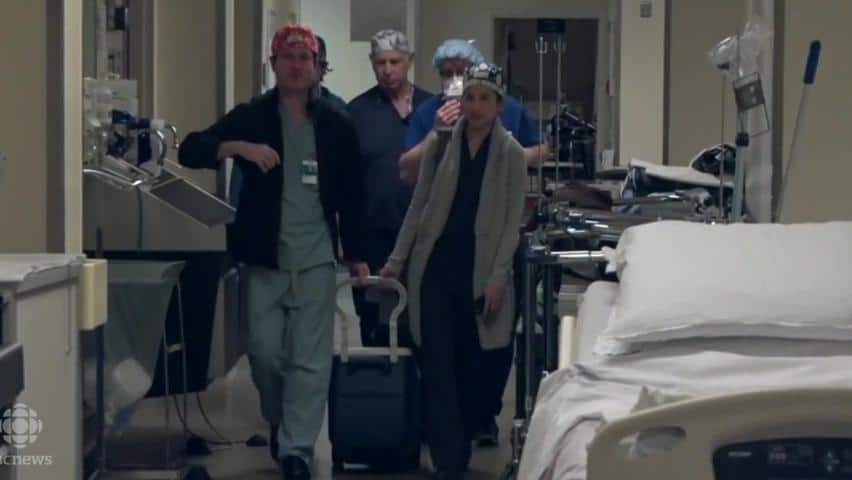 “Before, I was scared to look at it and how I would feel about it,” she admitted.

‘I can move my fingers’

Five months later, Zolfi has sensation and movement in her new forearm, and she’s starting to get both in her hand and thumb.

“I can move my fingers. I can hold a cup in my hand or I can pick up and drop something,” she said, demonstrating with the word “my” how much the donor limb has been integrated into her psyche. 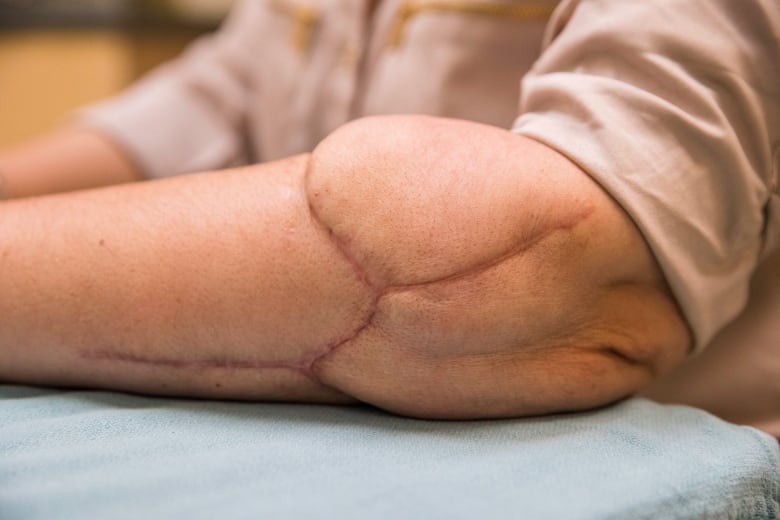 The tissue around Zolfi’s elbow where the forearm was attached remains puffy and her scars still have an angry appearance, but the lead surgeon, Steven McCabe, says more surgery will be done to ‘make the scars look better.’ (Mark Blinch/Canadian Press)

The tissue around Zolfi’s elbow where the forearm was attached remains puffy and her scars still have an angry appearance, but McCabe said a future surgical revision will “make the scars look better.”

The inner arm is also marked by a scattering of small, round scars, the result of biopsies to check for rejection, a potential threat that means a lifetime of taking immunosuppression drugs.

While Zolfi is no longer haunted by what’s known as phantom pain related to the loss of her lower arm, she now suffers a different kind of pain caused by the growth of her nerves into the muscles of the donor arm.

“The nerves have to find their way all the way down to reach the small muscles in the hand,” explained McCabe. “So we anticipate over the next six months or so, she will get some innervation down to the small muscles of her hand, and then we expect she will have a lot of further improvement in her hand function.

“We know the nerves recover about one millimetre a day, so she’s right on track or even a little faster for nerve regeneration. She’s a very focused and committed patient and she’s done extremely well.”

So well, in fact, that Zolfi is driving again, she cooks her own meals, and is able to do household chores — activities she never dreamed she would be able to do a decade ago.

She is even planning to return to work in nursing, though likely in an office job that won’t tax her still-healing hand.

“I’d like to encourage the people that have lost their hand because the way that it’s worked for me, I think it is going to work for them, too,” said Zolfi.

McCabe, a Canadian who was part of the Louisville, Ky., hospital team that performed that first U.S. hand transplant 17 years ago and now heads Toronto Western Hospital’s program, believes there are other patients in Canada who could benefit from the surgery.

“(But) we have to be very careful in our selection and make sure we have the best chance of healing that person,” he said, adding that the team is now assessing two “compelling” potential candidates.

Zolfi is grateful to McCabe and the surgical team, and especially to the donor and her family, who gave her a second chance at life.